How Does XMind Help with Screenwriting? 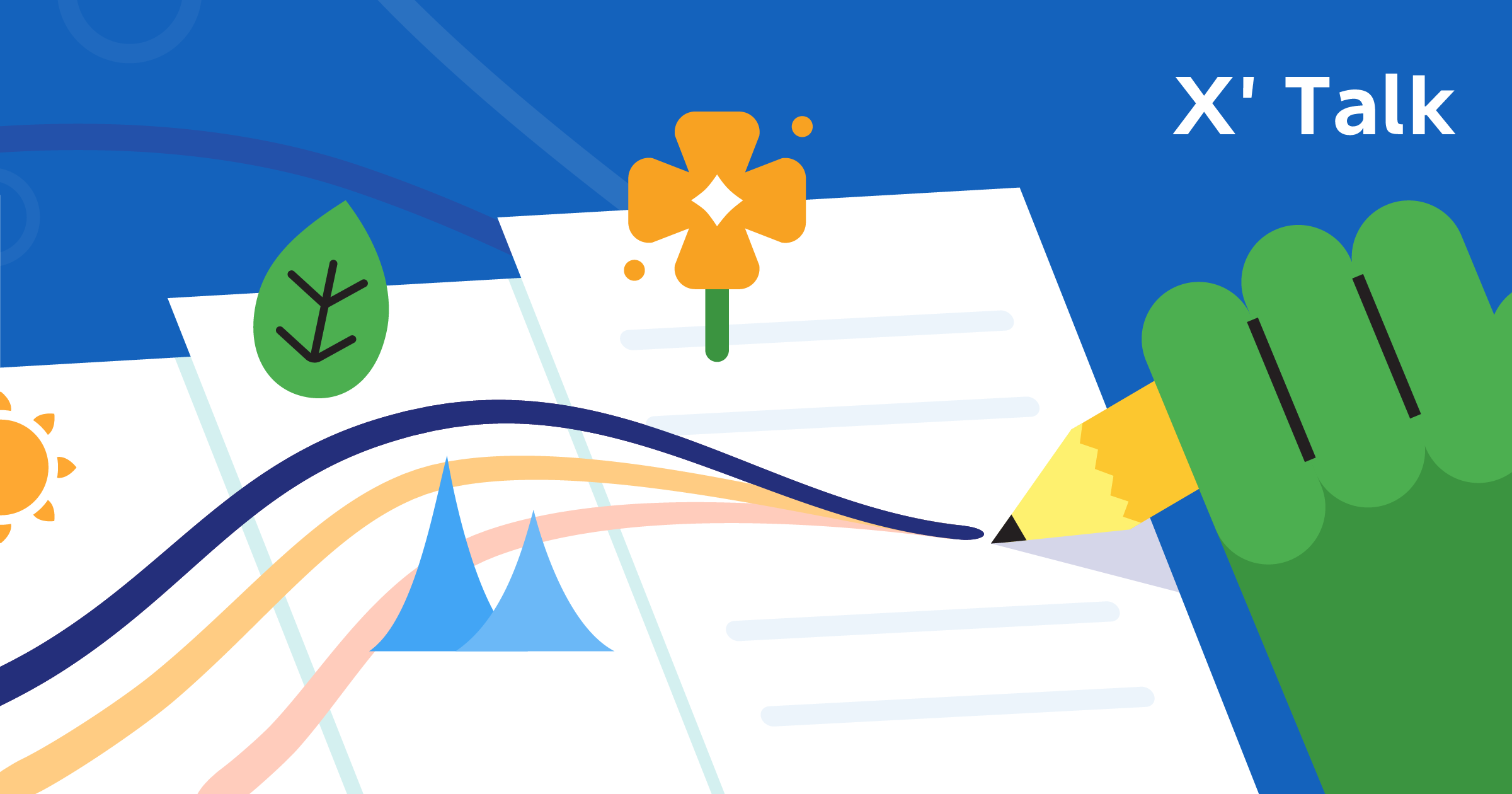 Have you ever imagined to create a script on your own? The exciting plots, the characters, and the reactions from the audience. Mind map is a good start for this — bits and pieces, develop characters, draft outline, even without exactly knowing it.

As a screenwriter and director, Héctor Cabello Reyes found mind mapping is the only way that works for him. With XMind, he sees an idea is worth to go further or not though mind mapping, and identify the problems occurred ahead. Find out his stories and suggestions.

Tell us a bit more about yourself, and what are you working on right now?

I started as an actor, and later became a play-writer and a theatre director. Then I started writing and directing small comedy acts for TV, and finally I began writing movie scripts, and became a professional screenwriter and director. Presently I’m working as a show-runner on a big-budget TV Show, I just finished the writing of the sequel of a movie which I co-wrote years ago, and I’m starting to write another TV show.

When did you start mind mapping, and how does it help for your life/career?

I started mind mapping 15 years ago. Mind mapping with that software was fine but far from my standard. I discovered XMind when it was released and loved it (even if I have suggestions ;-).

It completely suited the way I think and create. Everyone has his way of thinking: some see shapes and forms, others wander in some virtual space such as a city with streets, others think with words, etc.

I always thought, in my mind, with mind maps, without really knowing it. So, it’s the best tool I can imagine, even if we often need to switch between different kinds of visualization.

What is the difference between screenwriting and other writings? Such as a novel.

Everything I can say on this matter can be contradicted and is purely speculative, so don’t get me wrong: it’s only my humble opinion.

In a novel, you can get into the character’s mind. You can read what he actually thinks. In a movie, you can’t (except through voice over, but that’s exceptional), you can only see actions the character performs, and what he says, which is not always what he thinks or feels.

So in a movie, you can see everything which is about actions. These actions exist because the writer forces the character to do so: how do you oblige someone to do something (and mostly something he generally doesn’t want to do: ask Brad Pitt’s character if he wants to kill his wife’s murderer in Seven ;-).

Well, there’s only one way to do that in good fiction: you have to set up as a situation which will let the character no choice but to do what you need him to do. So, basically a movie is just a set of situations that you fit in a certain order, such as chords forming a symphony. Mind mapping allows you ton focus on what matters most : situations. Once you got that (e.g. "1917" by Sam Mendes), it’s just a series of branches and sub-branches in a mind map, and you’ve got your story. The rest is details : it does matter a lot, but you’re working in a charted territory.

How do you use mind mapping for screenwriting? Does it work?

Not only does it work, but it’s the only way it works for me. 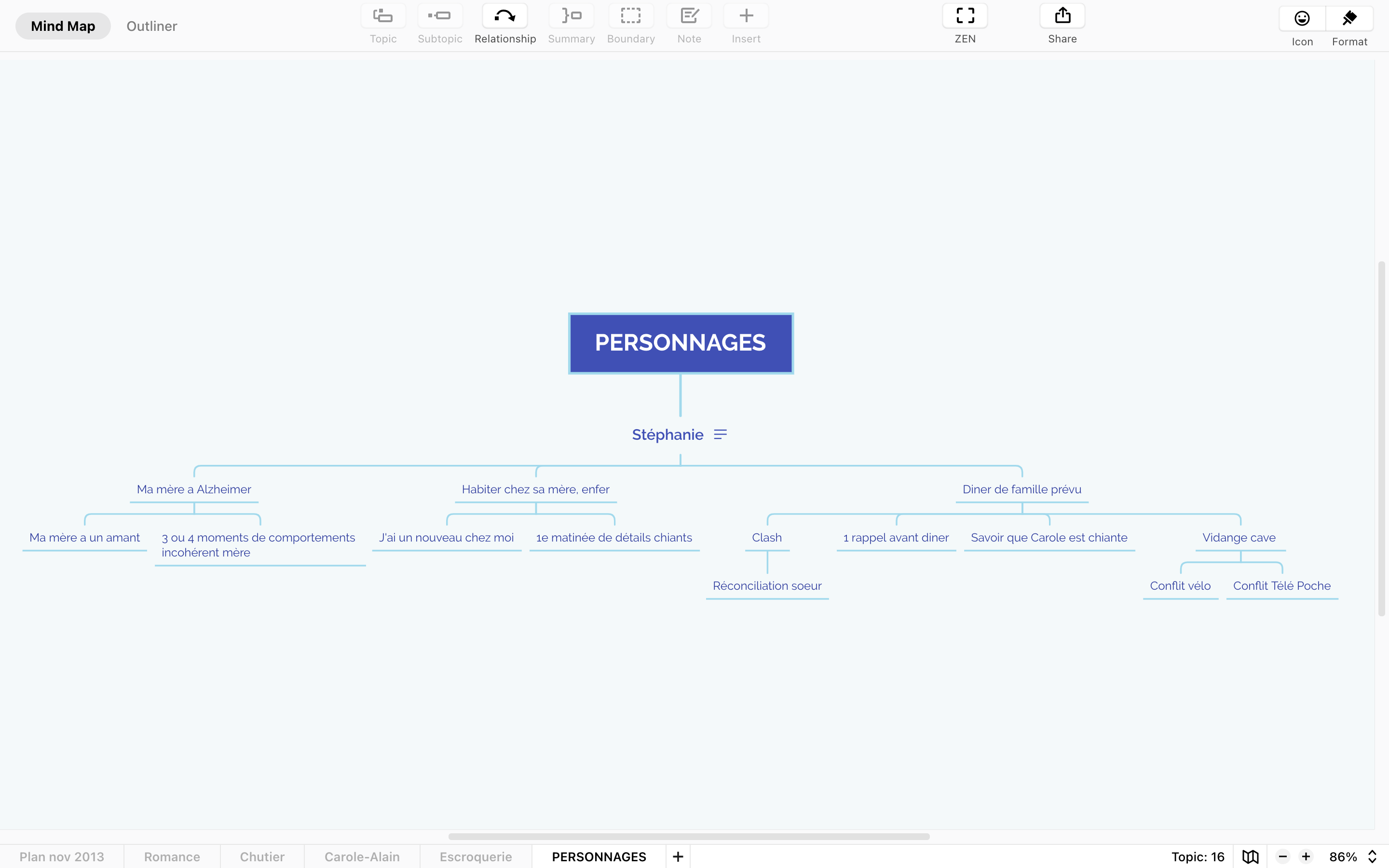 I recommend every screenwriter or person who wants to build up a story to mind map it first, if that’s the way they think (but lots of people think that way, I’m no exception).

How do you mind map a movie/show with XMind?

Well, mind mapping is back-office work, even an underground work — like the architect files in ArchiCad, so no one ever sees them. What people see is the script, a hundred pages of texts born from the structure built through mind maps. From the very first day I started mind mapping, it changed the output of my work : I started getting my scripts produced ;-)

When a producer reads a script, there’s a fine line between "The idea is great, but… I don't know. Let’s talk about it some other time,” and "I just finished reading it : let’s do it !".

The distance between these two situations is just, 99% of the time, this : building, structure, story. Lots of people know how to write dialogs (not everyone buts lots of people). Very few people know storytelling and beyond that, build 100 structures where the audience attention is always on the edge. That what MindMapping does best : it shows you through a quick glance where something’s wrong with the structure. It takes a few seconds, or minutes, when it takes hours with a script.

The MindMaps I share here show preliminary work for the screenplays of "Retour chez Ma Mère" and "Barbecue", which both reached big success here in France. 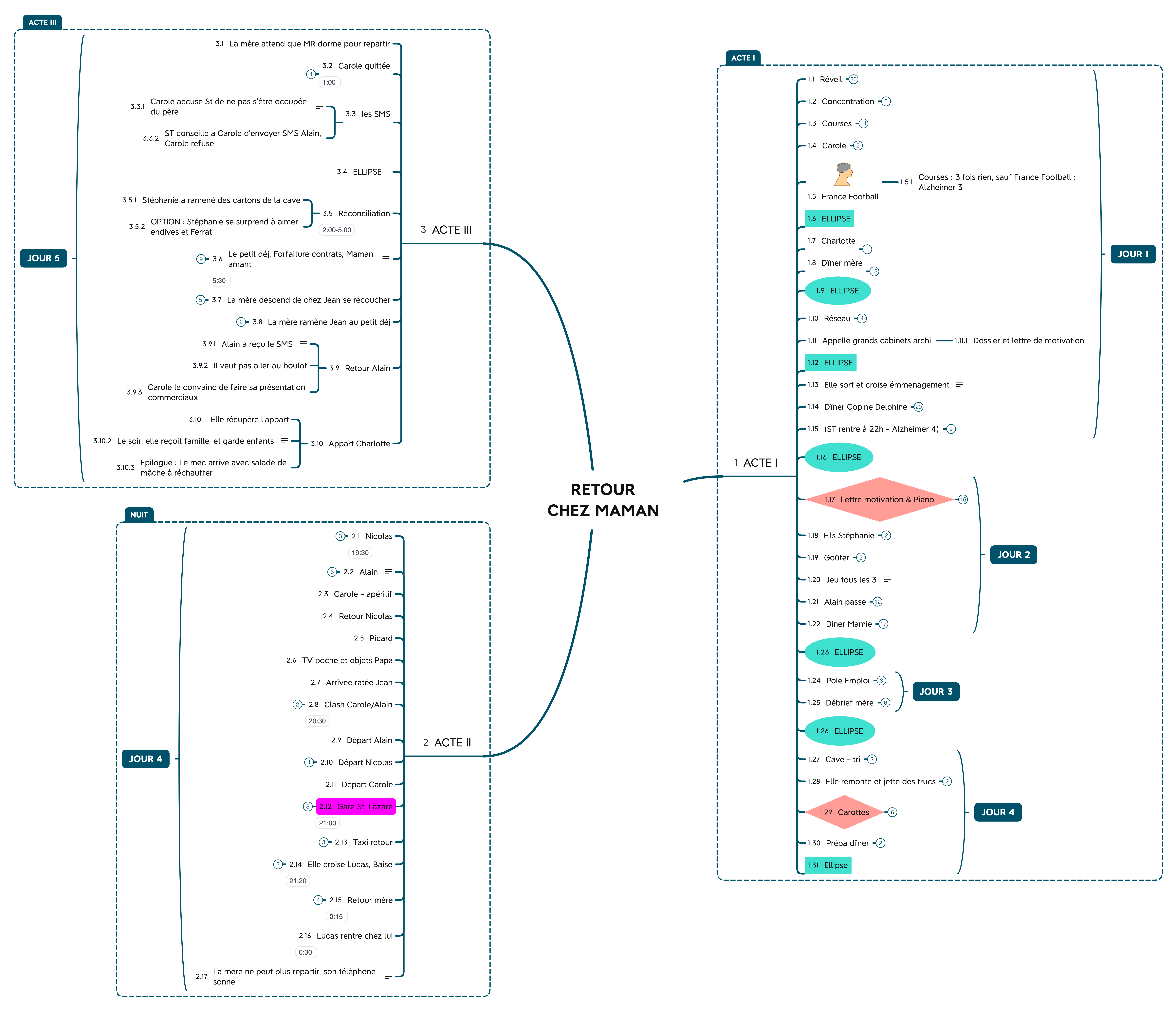 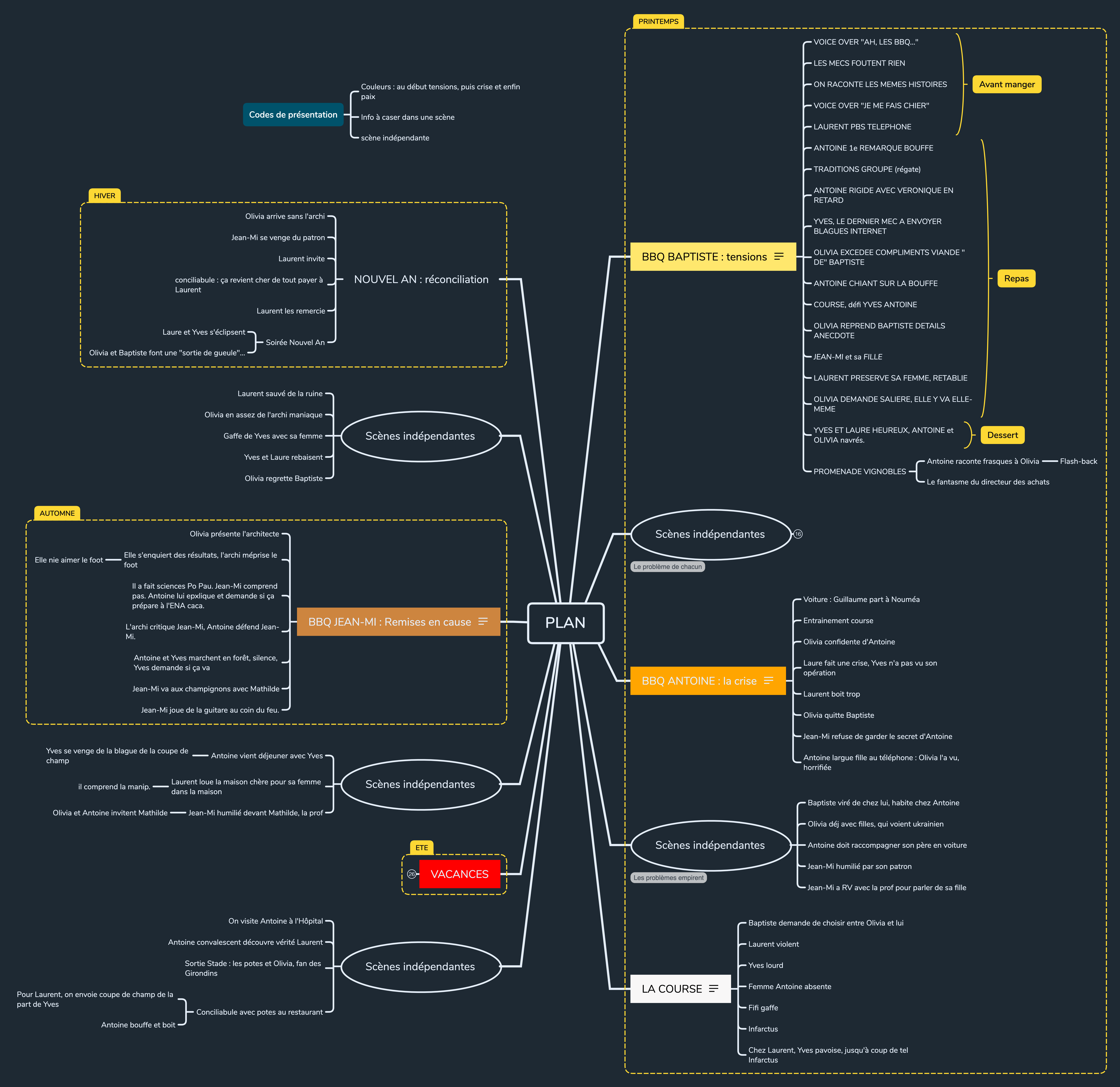 They show how far the structure work can go, and how the real story is hidden in these colorful boxes. The rest is about details and dialogs and jokes, which are essential too, but the real problems are never there. It’s just like building a house : if someone tells you the house you just built has a problem of wall-painting or a decoration issue : no big deal. But if you’re told that there’s a problem with the heating system which is built under the floor, then you must destroy the whole house and build it up again. Screenwriting mind maps are made to see if everything's ok with what’s beneath the visible surface.

We know an outline is important for writing, how do you use Outliner in XMind?

I sometimes use it because it shows the structure in different ways and that’s something significant : there’s never just one way to show something, and the more, the better because we’re all different. 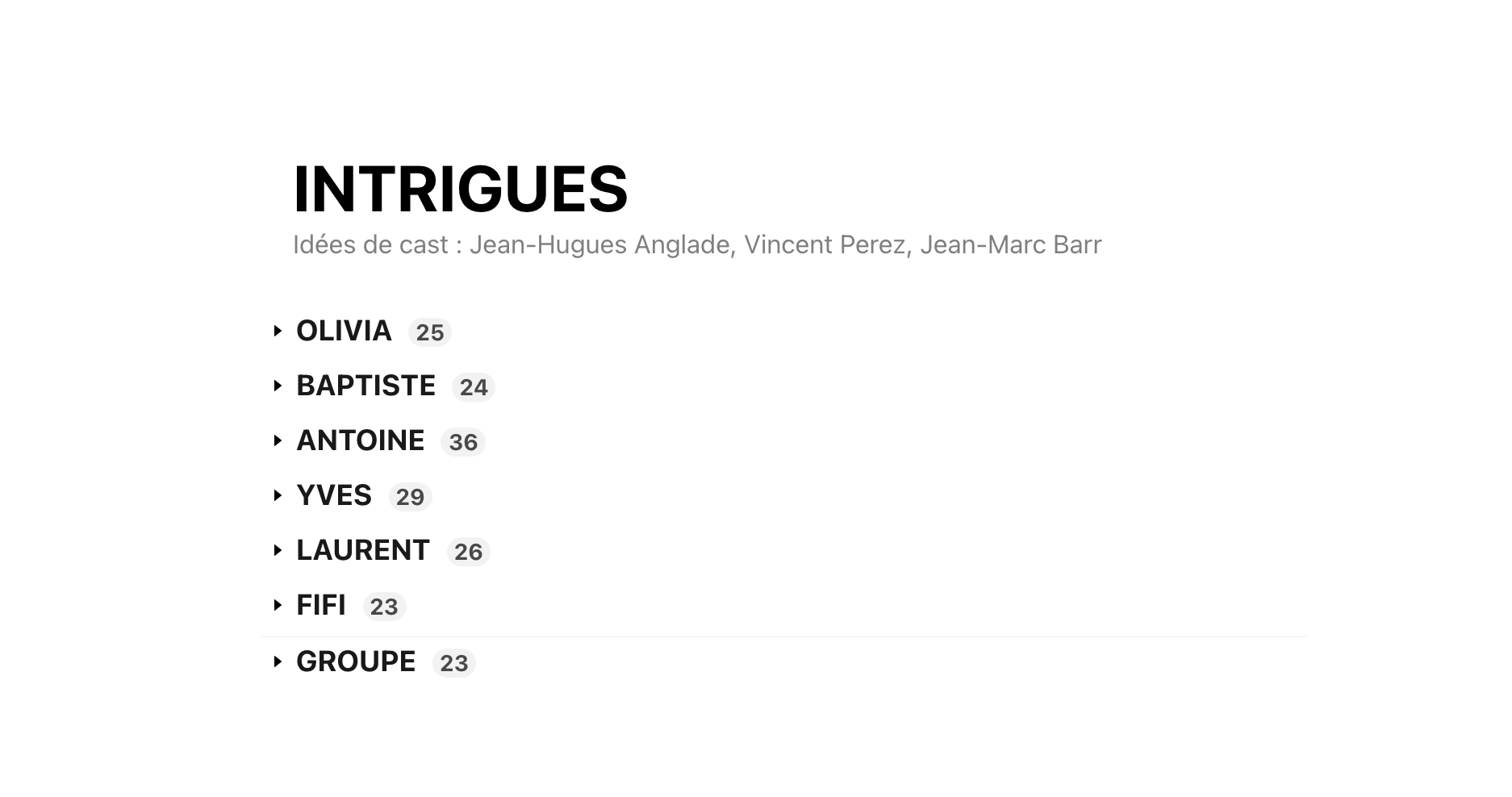 Especially when you need to see if everything’s ok from A to Z, quickly. In the MindMap, the eye travels. In the outline, it’s a succession, the eye controls.

We know 2020 is a tough year, what are the challenges for you? What have you come up with to face the situation? Does mind mapping help here?

It changed very little for me, I’m very lucky, for I’ve worked remotely through video for years. MindMapping saves me lots of time and makes more productive, and gives more time to do hat I do best : have ideas, bad or good, but have them ;-) Then, through mind mapping, I quickly see if it’s even worth to go further, and if the idea was good or bad.

Do you have suggestions for newcomers to your industry?

Stop writing scripts. Make mind maps and note down your dialog ideas for later, whatever you want but don’t write because 99.99% of the problems you’ll have to face reside in the structure. And mind mapping will show you these problems before you write, it can save you… years.

Notes: All the mind maps credit to Héctor.

# Customer Stories # Discussion & Insights
Héctor; Anne  Published on 2/1/2021, 12:00:00 AM
Previous: How to Level Up Your WFH Team with XMind and More
Next: Study from Home & Stay Motivated Tips
We use cookies to provide, improve, and promote our service. We do not leak or sell the collected data to third parties. By continuing, you consent to our Privacy Policy.